The early years in London, England

Versatile and creative Pianist, Bassist and composer Howard Britz was born in London, England 1961. He played trumpet then saxophone in high school and had begun to play professionally when an jaw injury forced him to give up wind instruments.  Switching to bass at 17 years old he also started composing.  After attending Guildhall School of Music in London he played in the London and UK scene from 1985. 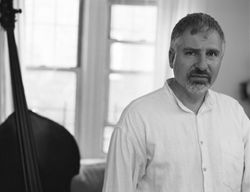 In 1995 he made the move to the US taking up a scholarship to Berklee College of Music in Boston, MA then transferring to New England Conservatory and graduating in 1995.  During the Boston years played with some of the great artists on the scene at the time including saxophonists Seamus Blake, Bill Pierce and Jacques Schwartz- Bart, pianist Danilo Perez, vocalist/composer Luciana Souza, The Jazz Composers Alliance and composer/pianist Guillermo Klein’s Big Van as well as many Latin Jazz and Salsa groups.

Moving to Philadelphia, PA in 1996 to join his wife who was studying at the University of Pennsylvania, Howard didn’t know a soul there but quickly found a fertile music scene going on. Although somewhat off the radar of many these days, Philly had some great musicians and he was soon in demand for a variety of Jazz groups, vocalists, Salsa and Latin Jazz groups.  Philly was also a great finishing school with all of the clubs, after work lounges and bars around the area, a real working Jazz musicians scene.

In 1998 Howard moved to Brooklyn, New York and recorded his first CD.  Released in 1999, ‘The Future, The Past’ was made with some of great musicians he had played with in Philly, with pianist/composer Uri Caine, trumpeter John Swana, and drummer, Byron Lancaster.  With original compositions by Britz it was a mature statement by a deeply soulful and experienced musician and composer.  Quickly establishing contacts with New York players and old ex-Boston contacts he started working around the city and doing some touring.

In 2005 he released his second CD, ‘Made In Brooklyn‘ with a crew of top NY musicians, including drummers Terrion Gully and Anthony Pinciotti, saxophonists, Jacques Schwartz-Bart and Casey Benjamin and pianists James Hurt and Helio Alves   The album also documented a group of musicians who were regularly getting together to play, jam and experiment and record as well as playing on gigs together.  Some tracks were made in these informal sessions and some recorded more traditionally at Tedesco studios in NJ.   ‘Here I Stand’, Britz’ third CD released in 2007 is perhaps his most cohesive and successful artistic statement. A quintet recording of eight original compositions featuring George Colligan on piano, David Smith, trumpet, Casey Benjamin, saxophone and Sylvia Cuenca, drums.

The CD received excellent reviews for the playing and writing, it contains all the elements that you hear in Britz’ playing, inventive melody, driving swing, latin influenced grooves, intelligent yet accessible songs.

From around 1998, Howard had also become interested in the possibilities of playing piano as well.  He had long used the piano as a composing aid but had never developed the technique or chops to really play live.  He set himself the task of playing piano professionally.  His first serious instrument being a saxophone back in High School, he never lost the sense of loving melody and solos which are not the main role of the bass.  Having worked for at the piano for many years, he recorded a CD that came out in 2013 called ‘The Feeling of Jazz’,  featuring, the great saxophonist, Donny McCaslin guesting on two tracks and bassist Bill Moring and drummer Eric Halvorson.

He incorporates the piano into his work, regularly playing on both instruments including playing Gospel piano for Rockland (The Rock) Baptist Church.  He also can be regularly seen playing with Empire Beats, a 7 piece Soul, R&B band where he plays keys and organ.